Welcome to the revised, reformatted, relaunched Mary Allen Stories blog!
New articles and follow-ups will be added in late 2020, but in the meantime, we'll be republishing the original 9 articles, many with newly added text and photos! Enjoy...

Posted by Karl K. November 13, 2012
In Waterloo Region, the story has often been told of how a group of Pennsylvania Mennonites bought a 60,000-acre tract on the Grand River that today contains much of the Kitchener-Waterloo urban footprint.

In 1806 two of these Mennonites, Abraham and Magdalena Erb, came north to take up their land purchase: hundreds of acres that would eventually become the Waterloo city core.


Within ten years Abraham built a sawmill and gristmill on Beaver (Laurel) Creek, and the Erbs had established Waterloo's first settler homestead. Today, the former mill site lies along King Street, between the railway tracks and Erb Street, while the c.1812 Erb home still stands as the rear section of the landmark Erb-Kumpf House at King and George streets in the Mary Allen neighbourhood. The original front of the house faced north, towards the mill.

Sprucing Up the Neighbourhood

Posted by Tricia January 08, 2013
When you stroll through our Uptown neighbourhood you will notice Norway spruce trees dotting the landscape. Soaring in many back, side and front yards, they are all a uniform size. These trees were planted by schoolchildren in the 1920s.


Before Elizabeth Ziegler Public School was built our neighbourhood kids went across King Street to attend Alexandra School (ingeniously re-adapted into condos in 2000). To celebrate Arbour Day, every student was given a seedling to take home. Years ago I met the woman who grew up in my house in the 1920s. She and her brother, children of George H. Skelton, each planted a Norway spruce in the backyard. Hers has survived and towers above our house at 40 George Street.
Arbour Day was started in Nebraska in 1872 by J. Sterling Morton. He was a journalist from the east coast who eventually became Secretary of the Nebraska Territory. He recognized the need for trees as a source of shade, for wind breaks, for fuel, to keep soils in place, and for building mate…
2 comments
See more »


Since the City of Waterloo recently bought the space, along with the school building itself, the corner has gotten a lot of attention in the  neighbourhood. Its future is an open question, but its past is a bit less of a mystery...

Walking through this quiet intersection, looking at the empty corner, can your imagination conjure a looming, four-storey factory built right to the edge of the sidewalk and stretching far back along both streets?
Between 1903 and 1930, that’s exactly what occupied this lot. Prior to 1903, it was undeveloped:

A 1902 article in the Waterloo Chronicle-Telegraph described Waterloo upholsterers Emil Schierholtz & Company as having “outgrown their premises” (in the Devitt Block, now demolished, on Erb Street near King). The same article said the compan…
1 comment
See more »

Posted by Karl K. December 01, 2012
The Grand Trunk Railway came to Berlin (Kitchener) in 1856, drawing the region within reach of the far-flung world, and broadening its cultural, commercial and industrial potential.

In Waterloo, the land made available by the 1855 Hoffman survey (see the blog post Mary Allen Beginnings, Part 1) meant that commercial and industrial enterprise could now gain a better foothold. The population increased to more than 1,200 by 1861, and would continue to grow steadily into the thousands during the late nineteenth century.


Waterloo's first business, the old Erb/Snider mill, was expanded, and brewing, distilling, barrel-making, and furniture and farm implement manufacturing developed alongside other large- and small-scale industries. Waterloo also eventually became known as a seedbed for firms dealing in insurance, which grew into a local specialty. Much of this fresh activity got its start on the new Hoffman Survey lots between William and Erb streets.

Posted by Karl K. November 16, 2012
The future of St. Louis Catholic School, located at the corner of Willow Street and Allen Street, has been a topic of considerable discussion since the City of Waterloo moved to purchase the building from the Separate School Board in early 2012.

As the first Catholic school in Waterloo, St. Louis is located on what was once referred to as the "Allen Street Sand Hill." At the time the hill was seen as having little to offer, and an early twentieth century historian mused: "One who looks at the site now can not realize what an unsightly hill it was, nor wonder that many would have preferred another place." (Spetz, 1916, p.181)

The school, which opened in 1891, originally consisted of two rooms in the basement of the St. Louis Catholic Church. School lessons were taught to 70 children by the Sisters of Notre Dame, who commuted from Kitchener (Berlin) by train until a convent was built beside the church in 1895.

WHERE IS MARY ALLEN? 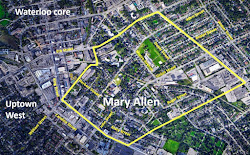 Click to see the Mary Allen neighbourhood boundary as described by the City of Waterloo.