Skip to main content
This blog is a project of Friends of Mary Allen (FoMA): friendsofmaryallen@gmail.com
Find out more about FoMA at our Facebook page - the link is in the sidebar.

Maybe you have a story you'd like to tell here?
Get in touch!
The Mary Allen neighbourhood is located within the Haldimand Tract: hundreds of thousands of acres along the length of the Grand River. The tract was defined in the 1784 treaty between the British and the Six Nations Haudenosaunee as reserved for the Six Nations and their posterity “to enjoy forever.” Non-Indigenous settlement of its northern half began c.1800, including what is now Waterloo Region. This land has been the territory of the Neutral, Anishnaabe and Haudenosaunee peoples since time immemorial. The Mary Allen Stories blog acknowledges this historical context and ongoing reality. Find out more, including more about treaties, in the sidebar under INDIGENOUS LINKS.

What Was Here?...at Union, Moore and Mary

Today, Moore Avenue marks the informal edge of the Mary-Allen neighbourhood.  A century ago it was the very edge of town, and the land there, before it was developed, was put to an interesting and uncommon use...


The earlier blog post Who Were Mary and Allen? introduced the Moores, whose name was given to Moore Avenue, and whose home stood at Union and Mary streets in the late 1800s and early 1900s.  (Some images and details in this post come from Laura Wilford’s excellent Moore genealogy, located at the Kitchener Public Library: Moore Lineage of North Dumfries Township: Unto This Land They Came.)


Born on the Moore family farmstead in North Dumfries Township in 1844, George Douglas Moore had moved to Waterloo by the early 1870s.  He married Mary Barrie in 1875, and by 1880 they had three children: Bella, Agnes Georgina, and Robert. Mary died suddenly at age 37 in 1888, with septicaemia given as the cause of death. George never remarried.

Moore grew hops on a large portion of the 150-plus acres he owned east of the Grand Trunk Railway tracks in the vicinity of today’s Union Street and Moore Avenue, at the edge of today's Mary-Allen neighbourhood.
Hop flowers, or "cones", are a key ingredient in beer, and Moore had been growing hops since the 1860s, earning him the occasional moniker, the "Hop King".

The Moore "hop yards" at the edge of Waterloo fluctuated between 60 and 100 acres under cultivation, and they produced some large yields of hops in the closing years of the nineteenth century.  Contemporary sources described Moore's operation as the largest hop fields in central and eastern Canada.  Several nearby breweries, including Kuntz's Park Brewery at William and Caroline streets, provided a local market, and Moore also supplied breweries throughout Ontario to as far east as New Brunswick.
In Ontario hops were, and still are, an uncommon crop, and challenging to raise. However, in the late 1800s and early 1900s George’s brother John also owned hop yards, in Preston, at the southern edge of Waterloo Township. The Preston yards covered a large acreage in the southwest end of town, stretching down to the banks of the Grand and Speed Rivers, reportedly continuing on the opposite bank.  Today, the names of Preston’s Moore and Vine Streets commemorate the hop yards, and mark their former location.

As recently as the 1990s there were anecdotal reports of self-sown hops occasionally being found growing near Preston’s Bob McMullen Trail that runs along the riverbank, almost a hundred years after hop cultivation in the area...
UPDATE: Very soon after the original publication of this blog post, the wild hops still found here and there in Preston were brought back into cultivation by the Tavistock Hop Co. and used to brew beer once again!  With Preston historian Ray Ruddy guiding them to the elusive remnant plants, the Tavistock hop growers took root cuttings and successfully planted and raised the heritage hops, which have been used by the local TWB Co-operative Brewing and Hespeler Brewing Co. to flavour batches of their beer.

Okay...back to Waterloo. In the later decades of the 1800s, just a block down Union Street from the Moore family home, stood Moore’s three hop kilns, conjoined in a T-shaped plan.  Numerous references to the building in local newspapers called it the "Hop House". Today, rowhouse apartments occupy the site at Union and Herbert streets.

Hop kilns, also called "oast houses" in Great Britain (hops were once grown widely in Kent), are specialized buildings in which hops are dried in preparation for brewing beer.  Hops were picked in late summer, then spread onto racks in the upper level of a hop kiln.  A fire was made on the floor below to dry the hops.
Hops likely were planted fairly close to the Moore kilns; the 1901 Waterloo street directory indicated “hop yards” at Union and Bowman streets (the latter street presumably named for David D. Bowman, an owner of property along Union Street, adjacent to Moore's land).  The following year, the Waterloo Chronicle-Telegraph announced that Moore would be needing 400-500 hop pickers for the harvest, as well as 50 men to pull up the hop poles.

On his farm, in addition to growing hops, George Moore bred award-winning work horses.  Other involvements included dealing in produce and eggs, selling farm machinery, and management roles with several manufacturing companies.
Moore was also active in local politics.  He served as a Waterloo councillor and as reeve of the town, as well as mayor in 1884 and 1890.  During his second mayoral term he was heavily involved in establishing the town’s first board of trade, and also in securing the farmland that would become West Side Park (Waterloo Park).

In spite of his successes, later in life it seems George Moore ran into some financial difficulty.  The local paper published a notice to creditors in the summer of 1909, announcing the distribution of Moore's assets.  A few months later the Moore farm, "160 acres more or less", was similarly advertised for sale.  Late in 1910, an auction at the farm included many farm implements, as well as a number of Moore's renowned horses.
George Moore retired to Galt around 1911, and just as he hadn't remarried after the death of his wife, their daughter Bella never married, caring for her father until his death in 1916.

According to Preston historian Ray Ruddy, by 1906 the Moore hop fields in Preston had grown their last crop and were being subdivided for house lots.

Back in Waterloo, the Union Street hop kilns remained standing at least through the 1940s, and were used by other businesses after their hop drying days had long passed, beginning in 1913 with an upholstering company.
Readers, do any of you know when they were demolished?

Hmmm...time for some more research...

Your comments and suggestions are appreciated! 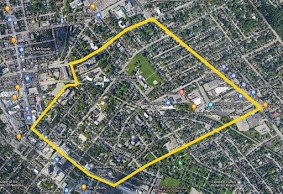 This map shows more-or-less, pretty much, basically the "official boundary" of the Mary Allen Neighbourhood.